After hours of deliberation attempting to select the winner of the 2015 Cat Connection Halloween Kitty Contest, we totally just gave up and randomly drew names. Behold and be afraid! 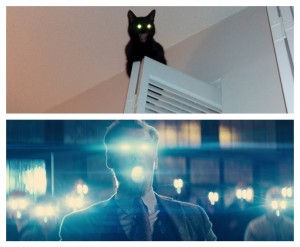 San-D submitted by Catherine Harris! We thought your kitty bore an uncanny resemblance to the alien robot Pierce Brosnan of The World’s End. Congratulations! 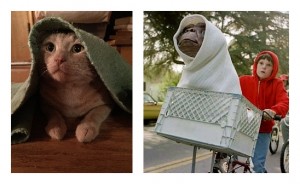 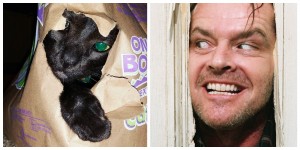 And Locke submitted by Ashley Lungwitz channeling his inner Jack Torrance in The Shining as he busts out of that chip bag (hopefully not because a hotel of vengeful spirits have sent him on a murderous rampage, but rather because chips are delicious).

So many amazing submissions! Here are just a few honorable mentions.

This kitty, submitted by Ruby Ratliff, as the indomitable Bette Midler as Winifred of Hocus Pocus.

Delilah, submitted by Kendal Lou Dickson, as the darker side of Harry Potter in Horns. 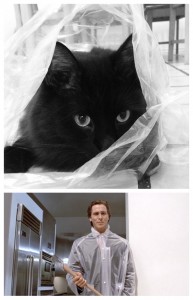 Ninja, submitted by Elvia Reyes Glusing, loves Huey Lewis and News (their early work was a little too new wave for his taste, though) as Patrick Bateman in American Psycho. 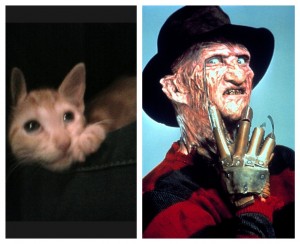 Aspen, submitted by Nicole Brooks, knows that you need to sleep sometime as Freddie Krueger in A Nightmare on Elm Street.

Coco Puff, submitted by Janis Whitsell Fromelius, as the werewolf in Red Riding Hood. (spoiler: Gary Oldman is the wolf!) 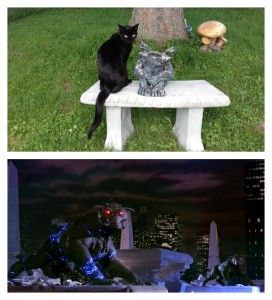 Angus, submitted by Cori Brown, just hanging out with Zuul, waiting for that keymaster and gatekeeper, in Ghostbusters.

This kitty, submitted by Calvin Harrod, prefers fava beans and food extra raw as Dr. Hannibal Lecter in The Silence of the Lambs. 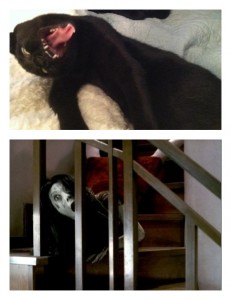 This kitty, submitted by Kelly Lynne Greene, reminds us that stairs can be terrifying as ghost mom in The Grudge. 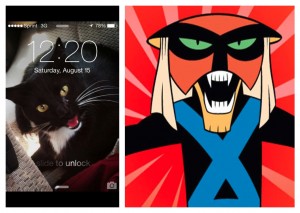 And finally Catula, submitted by Vanessa Hatcher, as Brak from The Brak Show!

SPOOKTACULAR PRIZES FOR ALL!!!!

Our winner and runner ups will receive a prize package full of our favorite cat and human goodies! But because all of our submissions were great, we’ll be sending everyone who took part in the contest a catnip toy in thanks for sharing your Halloween kitties with us. Please simply call the store at (972) 386-6369 and let us know which spooky kitty is yours and where you’d like the toy to be sent.

Yes, you are right. Last week we wrote all about how we hate costumes for cats, and yes, some of the submissions featured cats in parts of costumes. But we’re assuming that those costumes were on the cats briefly just for the purpose of this contest, right? Yes.