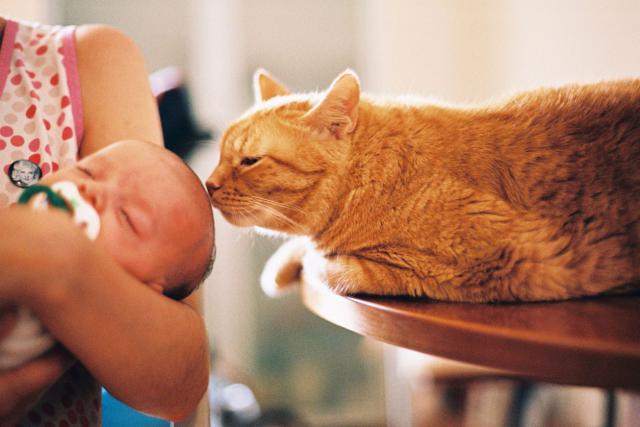 As you all know, toxoplasmosis made the news recently due to a maniac increasing the cost of a life-saving drug treatment by 5,000%.  For many, this is likely the first time they’ve ever had to think about the parasite, but for cat people, toxoplasmosis is a dreaded topic. Of course, this feeling of dread is not because toxoplasmosis represents any significant threat for most people, but rather because we’ve all encountered the tragically misinformed person who, “just had to get rid of the cat once they became pregnant. For the baby’s sake.”

Unfortunately, the myth that you cannot be pregnant and safely share your home with a feline is persistent and powerful, with similar confusion existing around the ability of immunocompromised individuals to live with their cat companions as well. But what’s particularly frightening is that people are rarely able to articulate why exactly they are afraid, what it is specifically about cats that makes them so potentially dangerous to pregnancy. We’ve even heard of cats given up due to “the kitty litter,” which is so absurd it’s almost funny.

So, in response to the unwarranted panic that so often results in the abandonment of feline family members, the Cat Connection is going to address all of your toxoplasmosis fears here.

Toxoplasmosis is a disease caused by the single-celled parasite Toxoplasma gondii. The CDC estimates that more than 60 million people in the United States may be infected with the Toxoplasma parasite, and due to its pervasiveness, it is possible that up to half the world’s population has been exposed at one point. Those with healthy immune systems rarely develop symptoms, but individuals who are newly infected just before or while pregnant or have a compromised immune system can often experience significant health issues. [Source: CDC.gov]

How do cats factor into this?

Cats, both wild and domestic, are the sole definitive host of Toxoplasma gondii, meaning that the parasite can only produce oocysts (eggs) while inside a feline host. Cats are exposed to the parasite by eating infected prey, the intermediate host, such as rodents and birds. Insidiously, the parasite’s modus operandi is to find itself in the digestive tract of a feline, and there is even evidence that the parasite is able to manipulate rodent brains to cause mice and rats to lose their fear of cats! (And in the process, become more likely to turn into a tasty snack.)

Once ingested, the parasite multiplies in the small intestine of the cat and produces oocysts, which are then excreted in the cat’s feces. Cats generally will begin shedding these oocysts three to 10 days after eating the infected animal, continuing to shed them for up to two weeks.

Notably, the oocysts are not immediately infectious, but rather must go through sporulation, which happens between one and five days following excretion. It is at this point that other animals, including humans, can become infected.

How does a human become infected?

Like rodents and birds, humans are intermediate hosts of Toxoplasma gondii, meaning that the organism cannot reproduce and create oocysts in our digestive tract. However, humans can become infected with oocysts in the following ways:

If oocysts are ingested, this results in the formation of tissue cysts in the body. Now, these cysts remain infectious for the host’s entire life, though they are dormant (e.g., have been corralled by the body’s immune system and no longer pose a threat). However, if the tissue is consumed by another animal, a new infection can occur. For cats, this means that they likely become infected when eating mammals or birds with these cysts present, thereby beginning the whole cycle again. Basically, the natural world is gross.

So, cats are the cause of this whole thing?

Yes and no. While it is true that as the only definitive hosts of Toxoplasma gondii, cats therefore play an essential part in the infectiousness of the parasite, it is important to remember that most cats are not infected with Toxoplasma, and therefore pose no risk of transmitting the parasite. Furthermore, most cats who are exposed at one point in their lives develop immunity and are never again able to shed the infectious oocysts.

It is only cats with new infections who are actively shedding oocysts, which then must remain in the environment for 1 – 5 days before becoming infectious, that pose a risk of inflecting you (inadvertently, let us add!). In short, your likelihood of contracting toxoplasmosis directly from your cat is almost non-existent.

The average person is more likely to be exposed by eating undercooked, contaminated meat, drinking contaminated water, or accidentally swallowing the parasite while gardening or eating unwashed fruits or vegetables from contaminated soil.

I’m still a little weirded out. Is there anything else I can do to protect myself?

Of course there is! To help protect yourself further, you may:

Other precautions include covering sandboxes at night (or just avoiding them entirely), wearing gloves while gardening, and avoiding raw or undercooked meat and protecting against contamination through kitchen items, such as knives and cutting boards.

Is there any chance I’m already immune?

Yes. In the same way cats who have been exposed develop immunity, humans too can develop immunity. Remember that Toxoplasma gondii is an incredibly successful parasite, and up to half the world’s population may have had exposure. Those are some crazy odds when you think about it.

If you would like to know your immunity status, a simple antibody detection test can be performed by your doctor. Of course, we recommend you have this test done before you try to get pregnant, as an infection during or just prior to pregnancy can have significant consequences.

However, be aware that there is the potential for false-positives, which could require a repeat of the test. For more information, see DPDx, the CDC’s Division of Parasitic Diseases and Malaria.

So, what really needs to happen for me to catch this from my cat?

Frankly, the planets really need to align for you to contract toxoplasmosis from your cat. In the vast majority of cases, all of the following must happen:

1. Your cat must become infected.

2. Your cat must not already be immune to the parasite, meaning she has never had exposure before.

3. You also must not already be immune to the parasite.

4. The oocysts must sit in the litter box for between one and five days.

5. You must somehow ingest these oocysts.

Compound that with the fact that an infected cat will only shed the oocysts for a few days in their entire life, the chance of human exposure is remarkably small.

And again, most people with a toxoplasmosis infection show no symptoms and experience no adverse effects. It is only in pregnant women and immunocompromised individuals where toxoplasmosis presents any real threat at all, but the risks can be mitigated.

And no, you will not become infected from petting your cat or cat bites or scratches.

Sadly, despite all facts to the contrary, many human healthcare providers still focus on the family cat as the sole source of infection, while simultaneously grossly exaggerating the likelihood of transmission. As with so much toxoplasmosis literature and advice, the message of “you don’t need to get rid of your cat!” is often followed by the parenthetical “[but seriously, yes, you definitely do need to get rid of the cat].”

If you’ve experienced this subtle pressure, you are not alone. In 2004, The Humane Society of the United States mailed the educational brochure “Your Baby and Your Pet” to 32,636 practicing Fellows, Jr. Fellows and Associate Affiliate members of the American College of Obstetricians and Gynecologists. Included in the brochure was “Toxoplasmosis: A Practical Guide for the Clinician,” which also included a survey postcard to be completed and returned by practitioners.

The two-question survey asked if the offices (1) ask their patients if they have cats, and (2), if so, what do the doctors advise? Out of 1,459 respondents, 1,364 offices recommended not cleaning the litter box, while 1,101 recommended avoiding raw or undercooked meat and 888 recommended wearing gloves while gardening, despite the latter two being the more likely mode of transmission for women in developed countries.

Furthermore, while only 42 doctors offices recommended re-homing or putting the cat outside, just under 3% of the total responses, this is a significant number when you consider the number of potential patients receiving this information, compounded further by the advice being repeated.

This is all to say that while your doctor certainly has your wellbeing in mind, it is imperative to be firm that giving up your cat or putting her outside is not an option. Fortunately, the facts are on your side.

Enough about me! Will my cat be OK?

If your cat is healthy, she will likely not exhibit any symptoms and will behave as normal as can be. An immunocompromised cat and all kittens are more likely to show symptoms and possibly require medical intervention. Symptoms often include fever, loss of appetite and lethargy, so reason enough to see a veterinarian in any case.

What about that whole schizophrenia connection thing?

Ah, yes. That. Every so often, the internet explodes with headlines such as, “Cat ownership linked to suicide!” or “Is Kitty making you mad?” Usually, Toxoplasma gondii is fingered as the culprit, which of course implicates cats as well.

This is a topic for another blog post, but sufficient to say, the correlation between cat ownership and mental illness is tenuous at best. Dr. Ron Hines provides a pretty comprehensive refutation of one of the more well-known studies here, but it is important to emphasize, yet again, the ubiquitousness of Toxoplasma gondii, as well as the minimal chance one has of contracting the parasite from their pet cat.

And of course, it turns out cats are actually good for you! As if we all didn’t know that already…

Hundred of cats are abandoned by families each year due to a lack of information of the risks of toxoplasmosis and its relationship to the family cat. Of course, the Cat Connection recommends you speak with your doctor and veterinarian for more information on toxoplasmosis, but we believe that educating yourself is essential to changing this too often deadly misunderstanding.

Please spread the word that kitty does not need to go to the shelter if you are interested in starting a family. After all, it’s not like the world can’t use some more cat people in it.

Tagged in:cat litter, disease, human baby, parasites, protect your pet, toxoplasmosis
The Dallas Cat Café Returns with Paws in the City!   Reality check: Making Arrangements for your Pets for After you are Gone (this just got real)