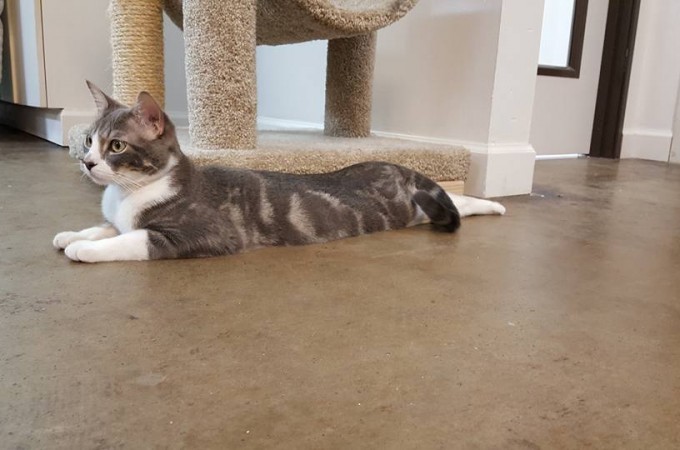 Meet Momo, a complicated kitty in desperate need of a loving, experienced forever home. Momo was surrendered to Farmers Branch Animal Adoption Services because his family “did not have enough time for him.” Unfortunately, what that actually meant is that no one had properly socialized Momo, and now his only hope is an experienced, patient person willing to work with him. Are you that special person?

Here’s what you need to know:

Momo is the cat your dog friends warned you about. He’s not mean, but he has not been properly socialized with humans. Because of this, he does not like to be touched and will swat and bite in response. That said, in the short time we’ve been working with Momo, he’s already improved and now allows some touch, but he will likely never be a cuddly kitty. That said, Momo loves to be around people. He just does not want to be touched or held. He’s basically like, “you do your thing, and I’m going to do mine, and we’ll be cool.” He likes other cats, but will be the boss of the relationship. We think he’d do well with cat-savvy, cat-friendly dogs as well.

He has excellent clerical skills:

Momo loves to play! He has a ton of energy and needs someone to bond with him through rigorous play sessions. He also loves to sit in the sink. It’s weird.

Momo should not be around kids. He would never attack a child unprovoked, but it’s unlikely any kid would be able to adhere to the strict “no touching” rule for this beautiful cat. We could see Momo inadvertently injuring a child who decided to pick him up or hold him.

Momo should not be declawed. You should not declaw any cat, but declawing Momo will NOT fix his problems and will make him more aggressive. It would ruin him completely.

Momo is healthy and beautiful. He’s been thoroughly examined by a veterinarian, and there is nothing physically wrong with him. He is also neutered and up to date on his shots. His markings are out of this world – you get the best of all worlds: stripes, clouds and leopard spots. He’s gorgeous.

Momo has been evaluated by a certified cat behaviorist, and there is hope for him. He’s not a bad cat, but people have failed him so far in his short life. He just needs the right person to let him be the best cat he can be.

Momo needs an experienced, cat-savvy person to save his life. If interested, please contact the Cat Connection at (972) 386-6369 or erin@theCatConnection.com.