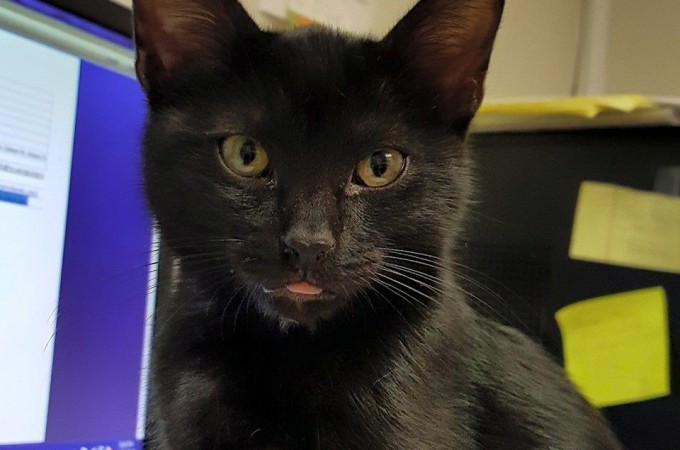 OnThe Cat Connection is pleased to update y’all on Midnight, the three-pawed kitten in need of a prosthetic limb. To date, the cat community has generously contributed $1,700 to Midnight’s prosthetic fund, enough to start him on his journey to four paws. We are so grateful for the support of our friends as Midnight heals.

Unfortunately, due to the Thanksgiving holiday, the mold for Midnight’s prosthetic was delayed on its way to OrthoPets in Colorado. Because Midnight is a rapidly growing kitten, we determined it to be more cost-effective to redo the mold than to risk creating a prosthetic that that would already be too small. This required another trip to the vet, but luckily, we did not need to recast the mold entirely. Instead, the vet was able to resize the existing mold and inform OrthoPets of the change.

Midnight has an appointment next week to be fitted with the prosthetic and taught how to use it. Though we’re certain he’ll take some time to adjust, the little kitten is both resilient and full of energy. We’re sure he’ll be up and running in no time!

In other news, Midnight has been renamed Muffin in honor of the Cat Connection’s Co-owner’s first childhood kitty. As we learned more about Midnight’s personality, it became clear that he was more cuddly and sweet than the name Midnight suggested. He now responds to Muffin, Muffin Man, Mister and panicked cries of “where is the kitten?!?!” (just kidding about that last one… he doesn’t respond to that at all).

Errin West, Co-owner of the Cat Connection, took Muffin home over the Thanksgiving holiday to continue with his socialization and care, all with the intention of bringing him back to the store after the break. Tucked away in his own room, Muffin was slowly introduced to the other cats in the house. The responses of the resident cats (and husband) were to be expected: basically a combination of indifference, disbelief, indignation and resigned, huffy silence for the most part. But fortunately, one of the cats formed an immediate bond with the little kitten! It was Tucker, the sweet cat adopted at a summer cat cafè via Farmers Branch Animal Adoption Center!

Tucker and Muffin became fast friends, with the older cat assuming a parent-like role for the little kitten. When separated, Tucker would cry at the door to Muffin’s room, sneaking past the humans the moment the door was opened to find his buddy. It wasn’t long before Tucker began grooming Muffin, gently correcting any bad behavior, and calling for the kitten to come join him at the top of the cat tower. As many of you may remember from Muffin’s original story, he experienced some difficulty interacting with other kittens, as the stub of his missing paw is easily hurt in the rough and tumble play of young cats. Tucker seems to instinctively understand his friend’s limitations and plays with him carefully and at the kitten’s pace. In short: they are inseparable.

Unfortunately, Muffin remains shy and wary of people, though he is learning to ask for and enjoy pets from Errin and a few other lucky humans. He hides often and is only truly at ease with his cat friend, Tucker. Because of these socialization concerns, Errin made the decision to officially adopt the little guy from the shelter. Not only will this ensure that Muffin has access to his prosthetic paws for his entire life, but he’ll also be able to live out his life with Tucker. Really, it was Tucker who made the decision for everyone with his devoted, parental care.

So thank you all again for your support of this little kitten as he heals. Stay tuned next week for updates on his prosthetic paw, and of course his budding bromance with Tucker.